My band with Nikki Corvette, Gorevette, opened for Blondie at the now previously named Nokia Theatre NYC on August 31, 2010. We were excited and maybe a little nervous. Gorevette played with Blondie on the West Coast in early August, but we had some time off before the show in New York City. So, we had been rehearsing in Detroit in anticipation of what might be the biggest show of the tour.

We showed up in Times Square ready to play. Show day had it’s stressful moments. First, we traveled from Brooklyn to Times Square only to discover we’d left some things behind. We had to go back. Then, a few hours before our set, Nikki realized she’d left her show clothes on the Upper West Side where she was staying. A quick cab ride later, Nikki returned to the dressing room flushed and smiling, her clothes in hand.

Blondie’s sound check at the Nokia was amazing. The band added songs to the set different from the West Coast shows. They did the Doll’s “Jet Boys” and Bowie’s “Heroes” in addition to a cover of the Ramone’s “Pet Cemetary”. While watching the check, I got a phone call from my rep at Gretsch Guitars. Gretsch is going to have me as their featured guitarist at Gretsch.com!

All of a sudden, everything seemed to speed up and we had only minutes to go before our set. We heard that the show was now sold out. Time’s up: we recited our pre-show mantra and marched on-stage. The first thing I saw once I looked out into the sea of people at the Nokia was Mary Weiss waving ‘Hello’ to me. I grabbed my guitar and we started the set. We brought it at the Nokia; I could feel tremendous energy behind us. Our 30 minute set came and went in a flash.

After the set I met up with Little Steven Van Zandt and his beautiful wife Maureen and the one and only Mary Weiss of Shangri-Las fame. Mary Weiss is the sweetest, toughest, coolest woman I’ve ever met. She wanted to say Hi to Blondie drummer Clem Burke. In addition to being quite possibly the best drummer alive, Clem Burke is the consummate host. He seems to always have a party in his room after the shows. In Detroit, Deborah Harry entered Clem’s backstage with a bottle of wine in hand proclaiming “Party in Clem’s room!” This show was no different. After the show, Nikki Corvette, Mary Weiss and I crammed into Clem’s room, now crowded with people. Little Steven was there talking to the Plimsoul’s Eddie Munoz, and in between the hob-nobbery Nikki suggested we pose for a photo:

After the show, we wandered around Times Square and then headed to the Hudson Hotel for an after party hosted by the one and only DJ Miss Guy. The Library Bar was packed. All of Blondie was in attendance, the lovely Deborah Harry at the turntables with Miss Guy & Co. The featured drink was the ‘Blondie': Grey Goose & Red Bull. I was introduced to Lee Childers at the bar, we had a fabulous conversation about vacationing in Tangier and his recently procured costume jewelry. 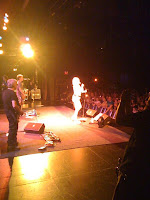 Blondie live at the NokiaSomehow we made it back to our digs in Brooklyn, and Nikki back to the Upper West Side. I do not remember how. I do remember it was the best time I’ve had in New York, ever. Thank you and goodnight! 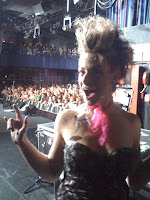 « Heading to NYC with Gorevette to meet up with Blondie
This is Amy Gore… featured Guitarist on Gretsch.com! »