Japan Day 3: The Truth About Osaka

Saturday, May 1, 2010: Gorevette departs our hotel in Yokohama en route to Osaka. Everything in Japan runs on time, except driving during the ‘Golden Week’, a national holiday.

We had an approx. 5 hour drive past Mt. Fuji, which turned into an 8 hour drive with holiday traffic. At Mt. Fuji, we stop and pose for a photo with our friends The Havenots. 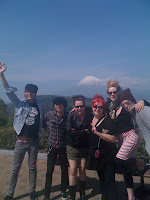 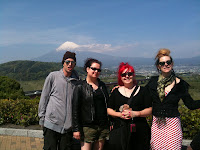 Osaka is an old and wild place; truly feral. I loved it. We wandered the streets wide-eyed and smiling. This is Osaka Tower, a centerpiece. All cities in Japan have towers. The tower is the subject of a new song and dance soon to take Japan by storm: Osaka Tower! It’s catchy. 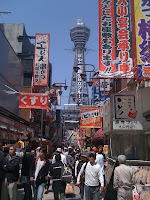 Our hosts Matt & Shimmi take us down an old and famous street past the Tower. It’s tight and small feeling, and lined with sushi bars and gambling ‘rooms’, I guess you’d call it. Old Japanese men huddle past and crowd the machines. None looks at us much. Matt tells us people drink more in Osaka, and earlier compared to all of Japan. I was feeling Hamtramck, MI deja-vu … that is a Detroit thing! 😉 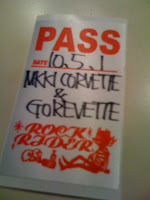 We arrive at Rock Rider, the club. The Japanese are efficient. All the clubs have gear, and at Rock Rider, they went a step beyond. Just inside the entrance are lockers and a Asahi Beer vending machine! PERFECT. 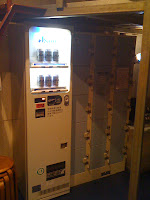 The show … well, I could try to explain this with words, but this would not be accurate. Recall I said Osaka was wild?

Before the show, we sampled traditional Osaka fare on the streets, Japanese ‘Soul Food’. The restaurant was loud, crowded and greasy. Our hosts ordered a sampling off the menu, we sat patiently awaiting it’s arrival. This is where the truth comes in: in Osaka, they like their meat on a stick! 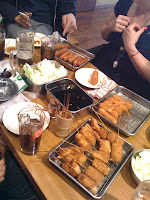 This is how it is served, in metal trays, family-style. The sauce is kind of like tempura dipping sauce mixed with soy. Cabbage completes the table. It resembled what I had as a kid called City Chicken, which is actually veal. I don’t eat meat, so the other options here are cheese and quail egg. Tiny quail eggs deep-fried in a fine batter and presented on a stick. Delicious and adorable! 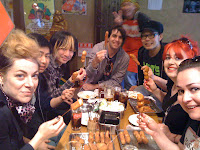 In conclusion, I can handle the truth about Osaka. Tomorrow we play in Nagoya at the Day Trip club …